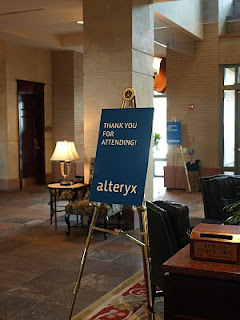 I would like to start by thanking everyone who was involved with the organisation and running of Extend 2010.  I thought it was a great event and very well organised.  I met lots of interesting people; got to see what others were doing with Alteryx and picked up a few new tips and tricks along the way.  This article is my summary of the event.

Day 1 - So after registration and lunch the first sessions I attended were the Alteryx Product Training.  These were the first part of a series of sessions totalling eight hours covering a range of Alteryx topics.  The first two sessions covered Allocate and Solocast before moving on to the basics of Alteryx.  Not a lot new for me in these sessions, but giving demo's and training in Alteryx is something I do in my role at Experian, so I found it useful to see someone else's approach to training.

The final session on day 1 was the Alteryx User Group Forum.  I thought this was a great session to meet other Alteryx users and see what other people are doing with Alteryx.  Ron House kicked off the session talking about his blog and had kindly given me five minutes to talk about mine.  It was a great opportunity to talk about what I've been doing and why I think interaction among the Alteryx community is important for all of us.  We then had a number of speakers from different companies talking about how they are using Alteryx; an excellent opportunity to get new ideas to take back to our own work.

Day 2 - There were a few different streams running on day 2 including the continuation of the Alteryx Product Training and the DemographicsNow User group, but the one which I attended was the Developer Summit.  This was a series of presentation's by Alteryx employees on a range of interesting topics aimed at the developer user of Alteryx.  All of the material from the presentations can be found on the Alteryx team blog here.

Session 1 - This was an overview by Ned of the tools in the Developer Tools section of the Alteryx toolbox, essential kit for anyone wanting to build macros, wizards or modules which begin to push the limits of what Alteryx can do.  I'd seen and used all of these tools before but was great to get some clarification of exactly what they do behind the scenes.

Session 2 - Another session by Ned this time on how to build Alteryx macros.  A good introduction on how to get started.

Session 3 - This session was run by Rob and covered the new feature of Alteryx 5.0: batch macros.  This is a feature I was crying out for while I was using Alteryx 4.0 and so have used a great deal prior to the conference.  My summary of the feature is that it starts to let you do loops in Alteryx.  Rob presented an interesting demonstration of how they could be used and a real world application.  What I found interesting was that relatively few people in the audience seemed to be using this powerful feature (look out for a future blog post on this one!).

Session 4 - Now we were starting to get into real developer realms with Linda presenting how to run Alteryx wizards from C#.  There's not many presentations you will see with Visual Studio and C# code up on the screen!

Session 5 -  This was a taster by Iain on the new Alteryx Web Services.  This looks like it will be very exciting and I'm looking forward to it being released and hopefully being able to have a play with it.

After lunch there was a 'bonus' session with Ned in the solution centre on using the Alteryx SDK to build your own Alteryx tools.  Another very exciting topic which opens up all kinds of possibilities for using Alteryx (another topic to look out for a blog post on).

Then after lunch we had the Alteryx Grand Prix in which I was a 'driver' and was the reason I had managed to get a ticket to the conference.  It's effectively "build Alteryx modules against the clock" and try and be faster than the other nine competitors.  It was a lot of fun and maybe got my heart racing more than getting up to talk at the user group forum the day before!  Look out for a second article covering this in more detail later.

Day 3 - The day kicked off with the President's Opening from Dean Stoecker where the company name change was announced (see my previous post); followed by an amazingly inspiration talk by Erik Weihenmayer the only blind man to have climbed the highest peak on every continent, including of course Mount Everest.  The rest of the day had a number of speakers from different companies talking about how they were using Alteryx in their businesses.  Though I must admit as a developer I didn't attend all of these, instead spending a fair bit of time in the solutions center talking with the Alteryx product developers.  Something which I found very useful, so thanks everyone for your time.  The other interesting session in the day was a talk by Amy Holland on the future of Alteryx; I'm looking forward to getting my hands on Alteryx 6 already!

The day concluded with the awards dinner and then drinks into the evening, a great end to a great conference.  I found the whole event really useful and motivational, especially being able to meet other developers and exchange ideas and techniques.  I hope I can get there again next year!
Posted by Adam Riley at 07:57