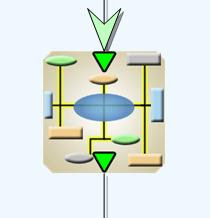 RegEx (or Regular Expressions) are a method for processing text which has its background in UNIX and perl. They are a fairly complex but incredibly powerful way of manipulating text strings, and what more, support for using them is built directly into Alteryx!

Firstly I would like to start with the basics of regular expressions with a simple example: e-mail address format validation. Consider the basic validation rules for an e-mail address: It must consist of a series of characters followed by a '@' symbol followed by another series of characters which must contain at least one '.' symbol (In actual fact you can have more complex rules than this for e-mail validation, but to keep this example simple we will stick with this simple definition).

I began to think how I would produce this validation in Alteryx without using RegEx. The most logical approach I came up with was the Alteryx formula tool:

So not too bad, but what if we now want to check that there isn't a second @ after the first and it doesn't start with a '.'? That formula is staring to look more complex and will only continue to do so as we add more rules.

OK so how does it work the RegEx way? First we need a regular expression which will match our rule which is this

^.+@.+\..+$
At which point, for those who don't know RegEx we come to our first drawback: it is an entire new topic in its own right which needs to be learned; and until you have spent some time learning the rules (and probably for a while after you have learnt them) regular expressions look like gobbledygook. There's no getting round it: they come from a time in computing when memory and storage were extremely limited and developers had to make every character count, but once you get your head round them they can be incredibly useful.

I can explain the one above as follows: 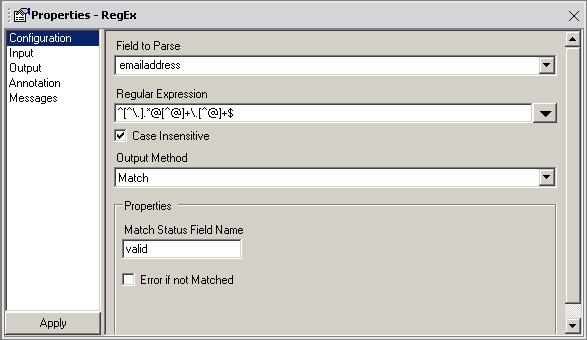 The three different validation methods can be seen in the example Alteryx module that can be downloaded from here:

If that was all you could do with RegEx then it really wouldn't be worth the effort of learning a new language for.  But that is just the start of what we can do and the real power of RegEx becomes apparent when we start using some of the other RegEx methods available in Alteryx such as the REGEX_REPLACE function and the parse method, which I will look at in part 2 of this blog post.